Harry Phelan Gibb (pronounced Faylan) was born in Alnwick, Northumberland in 1870. Initially working in a traditional style he was later influenced by a Cézanne exhibition in 1907 and adopted a more mordernist approach. Gibb set up his studio in Paris studying under Jean Paul Laurens1 in the early 1900s 'bang on period' for that time of accelerated artistic expression between the turn of the century and the advent of the First World War. In this enlightened time the avant-garde art scene in Paris flourished and was grasped wholly by Gibb during the 20 or so years he was there – neo-impressionism2, post-impressionism3, fauvism4 and cubism5, all artistic styles explored, developed, mastered and personalised by the artist, who rubbed shoulders with many of the greats including Picasso, Gris and Matisse.

Below: Detail from 'Devon Village' watercolour by Phelan Gibb. 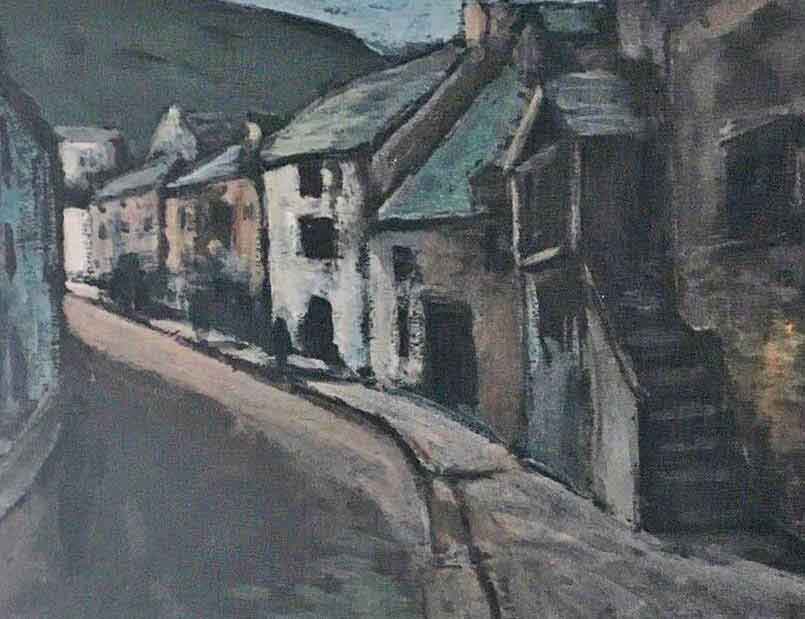 Significantly Gibb also associated closely with one of the foremost proponents of modernism, the American Gertrude Stein. As well as being an avid art collector, Stein was a novelist, poet and playwright. After moving to Paris in 1903, Stein hosted a salon where leading members of avant-garde literature and art would regularly meet – Picasso and Matisse to name but two. Stein befriended, supported and patronized Gibb and even used him as the inspiration for a literary work – ‘A Portrait of One Harry Phelan Gibb’. It is apparent from its subject matter that Phelan Gibb was a troubled soul.

The artist was born Henry William Gibb, the son of an Irish mother and artist father Thomas Henry Gibb. Gibb’s father, also born in Alnwick, is listed in an 1881 census as an Artist and Bailiff of the Alnwick County Council. Gibb’s sister Sadie Gibb was also an accomplished artist. Initially Gibb was trained by his father - there are similarities in style of painting between father and son, though Phelan Gibb's hand was looser.

The artist exhibited as H W Gibb until 1895 from which he started using Phelan after the initials H W – adopting Phelan in reverence to his Irish family heritage on his mother’s side – and later referring to himself as Henry Phelan Gibb, Harry Phelan Gibb or simply as Phelan Gibb. As well as studying in Paris, Gibb also studied at Newcastle, Edinburgh, Antwerp and Munich. 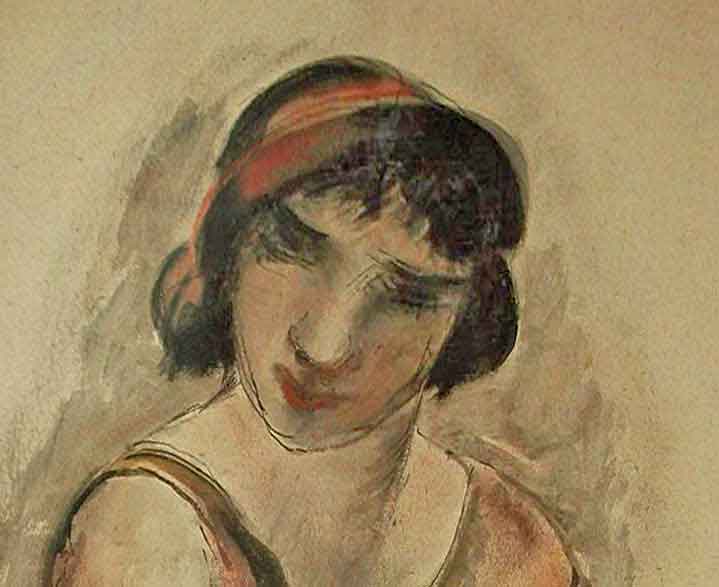 Not much detail is known about Gibb’s early life and career. It is hinted that he suffered with a mental illness - possibly depression, and perhaps this set him back to some extent but may also have been part of the driving force behind his unique take on the current artistic breakthroughs in the Paris School of the period.

In 1909 Gibb became a Sociétaire at the acclaimed Salon D'Automne having already exhibited there regularly. At this time Gibb had a studio off Boulevard Raspail and it was there that he taught Canadian artist Emily Carr. After arriving in Europe in 1910, Carr sought out Gibb and his application of colour and painterly techniques were to have a profound and lasting effect on her work. After returning home in 1912 she was to go on to become one of Canada’s leading and revered artists having been one of the country’s first to adopt a modernist approach to painting, especially seen in her impressionist works.

Above: Detail from 'Woman' chalk and wash on paper by Phelan Gibb.

In 1911 Gibb held his first one-man exhibition in London at the popular Baillie Gallery in Bruton Street, which had exhibited works by artists such as John Lavery and Anne Estelle Rice. Gibb was also to exhibit in New York, at the AAA as well as Redfern Gallery, Lucy Wertheim’s gallery, RHA, Alpine gallery and RSA.

Significantly in 1913 fourteen of Gibb’s works were shown in New York at the ‘Armory Show’ (also known as the ‘International Exhibition of Modern Art’) organised by the American Association of Painters and Sculptors. This was the first major exhibition of modern art in America and impacted profoundly on the country’s realists by introducing European avant-garde works in impressionist, fauvist, futurist and cubist styles. Phelan Gibb’s works were displayed alongside those of Marcel Duchamp, Degas, Albert Gleize, Constantin Brâncuși, Cezanne, Van Gogh, Irish artist Jack Butler Yeats and many other household names in art.

Below: Detail from 'Five Men Sat Around A Table' c .1916 unfinished oil on board by Phelan Gibb. 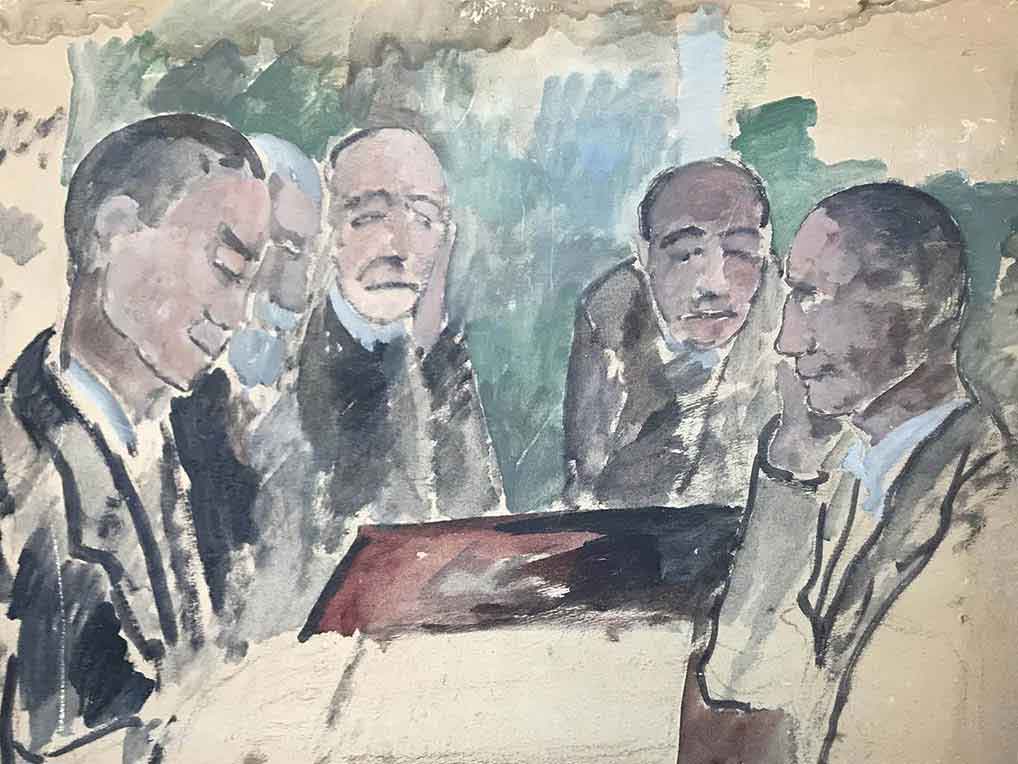 Gibb was now at the peak of his popularity and later in 1913 he held a solo exhibition at the distinguished Bernheim Jeune gallery in Paris, where it is documented that almost 1500 people attended on the opening day. Afterwards the show was moved to Dublin to an exhibition organised by Oliver St. John Gogarty6 and Count Casimir Markievicz7. The show was closed down by the local constabulary from pressure exerted by Catholic priests disapproving of the subject matter of Gibb’s works (many of the Gibb’s paintings at this time were of nudes painted in a primitive manner). The works were not handed back to the artist until 1930 (alternatively reported as 1933). Gibb again travelled to Dublin for a commission to paint a portrait of the dancer, Jacqueline Robinson, who was a friend of Mainie Jellett and had close associations with Basil Rakoczi and Kenneth Hall.

At the beginning of the war Gibb moved back to England where he experimented with creating pottery and continued to exhibit in London. The effects of the war caused his career to suffer and he fell on hard times like many of his fellow artists of the period. This downturn of fortune continued through the 1920s, though in 1926 he was commissioned to illustrate a French novel by surrealist Rene Crevel titled ‘1830’. It is recorded that during this period Gibb resided at a property near Brendon on Exmoor in Devon. Either the property was designated as being ‘desolate’ on the Ordnance Survey or the name of the property was actually ‘Desolate’. There are conflicting reports, though considering Gibb’s financial position at this time it seems likely that the property was not in the best state of repair. It is noted that Gibb’s output at this point was inconsistent but of course this is subjective. He resorted at times to decorating pot-boilers for prizes to be awarded at agricultural shows. 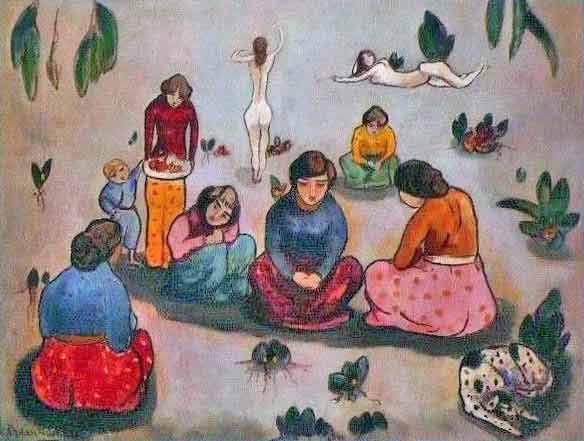 Things improved significantly in 1931 when he was rediscovered by the art dealer Lucy Wertheim who was promoting Christopher Wood and the White Stag group of artists. Wertheim held a number of exhibitions of Gibb’s works at her gallery and helped to support and refresh his market. Gibb and his much younger second wife were personally and financially supported by Wertheim during Gibb’s decline as an artist. Wertheim’s backing allowed Gibb to continue painting in his London studio and subsequently in a studio in Buckinghamshire.

Gibb became a fringe member of the White Stag group of artists, which was centred around Basil Rakoczi and co-founder Kenneth Hall. Although founded in London in 1935, the group relocated to Ireland four years later attracting Irish artists including Thurloe Conolly, Stephen Gilbert, Paul Egestorff and Patrick Scott. 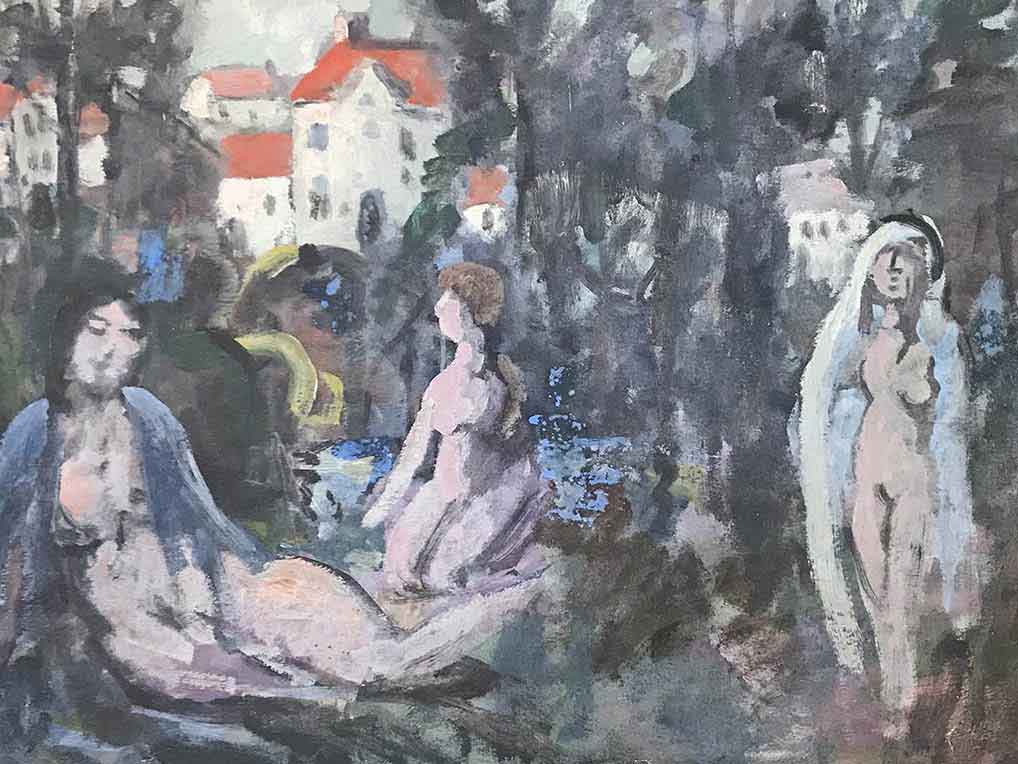 With Wertheim’s financial backing, travelled around the UK, France and further afield, searching for inspiration. Gibb featured in ‘Adventure in Art’, Lucy Wertheim's memoir. In her biography she later wrote that...

"The English artist still living whose work probably is of the most permanent value is Phelan Gibb. One day Phelan Gibb will doubtless come into his own, and his finest paintings take their place alongside examples of Manet, Cezanne, Picasso, … in international exhibitions of Modern Art"

Phelan Gibb’s work had been described as earthy and naïve, a style that wasn’t to everyone’s taste during his career. However a strong supporter of the artist’s work was art critic Roger Fry. It was Fry that actually coined the expression ‘post-impressionism’.

Harry Phelan Gibb died on 25th October 1948 of a heart attack in Great Hampden, Buckinghamshire. In 1961 the Alwin Gallery posthumously held a solo exhibition but sadly only one picture sold.

Above: Detail from 'Naked Figures in a Woodland Scene' 1916 oil on board by Phelan Gibb.

Astute art dealer Duncan Campbell (Duncan Campbell Fine Art, Thackeray Street, Kensington, London) in the 1980s handled Gibbs work as part of a push to promote White Stag artists such as Kenneth Hall and Basil Rakoczi, whose work along with Gibb's had been shown in London in the 1930s by Lucy Wertheim. Campbell had handled numerous works from the Wertheim estate that he continued to sell, helping to revive the reputation of Gibb and others such as David Burton, Humphrey Slater and David Gommon.

November 2011 saw a Gibb exhibition at the Peppercanister Gallery in Dublin 'An Irish Fauve Discovered' (including ‘Six Horses in a Landscape’ – 1945, ‘Church Interior, Buckinghamshire’ – c. 1935). This show was a great success and was extended due to its popularity and to accommodate prospective buyers. One of the Gibb paintings displayed at the show was ‘Paysage’, painted in the fauvist style during Gibb’s visit to the south of France where he worked with Matisse and other proponents of fauvism. This is likely the same work, painted in Collioure in the South of France in 1906, that art and literary critic Bruce Arnold described as 'the only Fauve work by an Irish artist. In an article for The Irish Times, Eileen Battersby reports: “The Dublin show is exciting; on entering the space there is a sense of Matisse, Braque, Picasso and also Chagall. Gibb has a subtle, whimsical feel for colour and his otherworldly vision evokes Jack B Yeats with whom he exhibited in New York in 1913.”

It is well documented that Gertrude Stein was convinced that the two painters of her generation that would be discovered after they were dead were Juan Gris and Gibb. Stein was proven right about Gris but we still have to wait for Harry Phelan Gibb to climb the ladder.

Hopefully exploring Gibb’s story further and bringing together examples of his works on this website will help elevate the artist to where he deserves to be.8

Signature dates have been constructed from signed and dated works by the artist and known details.
If you have evidence to the contrary or can provide more accurate dating material please contact us.

1Jean Paul Laurens (1838 – 1921) was one of the last proponents of painting in the French acedemic style. He taught at Académie Julian, Paris, and was a professor at the École nationale supérieure des Beaux-Arts in Paris, where he taught George Barbier and André Dunoyer de Segonzac.
2Neo-impressionism is an art movement founded by Georges Seurat in 1884. It uses dots and blocks in a divided manner to build up colour. Harry Phelan Gibb produced a number of impressive works in the neo-impressionistic style.
3Post-impressionism was a subjective art form that was developed in the 1890s as a response to the naturalistic depiction of light and colour seem in impressionistic works.
4Fauvism was developed at the beginning of the 20th century using bright colours and bold painterly brush stroke. The leaders of the group were Henri Matisse and André Derain. Harry Phelan Gibb helped develop the style working alongside Matisse and Derain in the south of France.

5Cubism was an abstract art style deveoped around 1907 – 1908 by Pablo Picasso and Georges Braque. Cubism depicted different views of the same object or scene withing a single work. Harry Phelan Gibb knew and was influenced by Picasso and produced a number of cubist works in a style that was his own.
7Dublin born Oliver St. John Gogarty (1858 – 1957) was an Irish poet, politician, author, athlete and popular conversationalist.
8Polish born Count Casimir Markievicz (1874 – 1932) was the husband of the Irish revolutionary Constance Markievicz. He was a playwright, artist and theatre director.
9There are Harry Phelan Gibb paintings for sale in the Vintage Arts shop.